A Common Misunderstanding in Using Connectors

By Unknown February 04, 2012
I have been asked many times by customers, that why they cannot use a connector to connect between ports on the boundaries of blocks in SysML Block Definition Diagram (BDD). Is that a tool's problem?

After I have answered this question many times, I think it would be helpful for SysML users if there is an article to answer such question.

For easy to explain, please see Figure 1. My customers try to use a connector to connect port p1 of SubSystem1 to the port p2 of SubSystem2 but they cannot. So, they have asked me with above question. 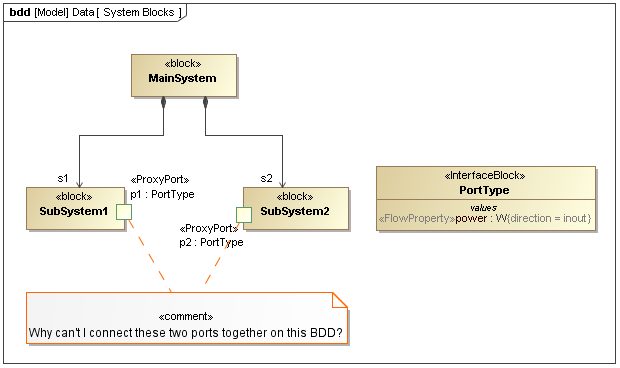 BDD is used to define blocks in term of their features and structural relationships with other blocks [1]. Someone may think that the relationships are allowed, so connectors should be allowed too. In fact, the connector is not a relationship. According to UML v2.4.1 Superstructure [2], the Connector meta-class does not inherit Relationship meta-class or any sub-types of it.

So, how the connector should be used?

If you have read the UML 2.4.1 superstructure [2], you will see the third constraint of Connector meta-class (from InternalStructures) which say that a connector can only be used to connect between roles which are owned by the classifier that own the connector or the ports of such roles. Even though the SysML specification allow to use connectors across the boundaries of nested properties to connect to properties within them, but connectors still be used within a boundary of a context block.


At this point, someone may argue that they have seen connectors in BDD.  Why?

My explanation is, SysML v1.2 Specification [3] have defined a structure compartment on a block symbol. This compartment can contain any of the graphical elements of an internal block diagram. You may consider that the border of this compartment is equivalent to the frame of IBD whose context is the owner block of the compartment. Thus, connectors can be used in this compartment, even they are in the BDD (Figure 3). However, these connectors still be used to connect roles within the same context block. 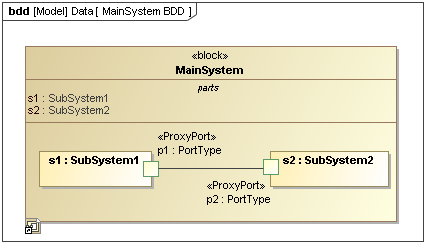 I hopefully expect that this article could help you to get a better understanding in using connectors in you model.

Popular posts from this blog

By Unknown August 10, 2012
It has been a while since I posted my previous article on this blog, because I was busy in making MagicDraw SysML supports for the new OMG SysML v1.3 Specification [1]. Couple weeks ago, I was asked by a customer about how to model a clock which counts every second with SysML. I created the simple clock model for answering. I also posted it to the SysMLForum and found that some people are interested in my clock model. So, I wrote this article to explain about the clock model and show how to model the system operating by a time trigger. Start from defining the clock with a SysML block. The clock block contains only a value property t . This value property represents time in second. Thus, a value type Second must be defined for typing the value property as in Figure 1. Figure 1 - SysML Block Definition Diagram of Clock Model Next, SysML State Machine will be created to describe the behavior of the clock block. Here, the clock state-machine was designed to have only one state
12 comments
Read more

By Unknown February 09, 2012
This article was written when SysML v1.3 specification is in releasing process. If you are a big fan of SysML and keep in touch with SysML RTF, you may have seen some documents or books about SysML v1.3 such as [1] and [2]. One of many things that I am impressed in those books and documents, is the way they use SysML to describe nested ports and specify compatibility between connected ports using association blocks.  When two ports connected by a connector, they may have nested ports which themselves can be connected. An association block has been suggested for defining the internal structure of the connector. It could contain a set of connectors that define the connectors between nested ports of association ends. When a connector is typed by an association block, the interaction between roles at both ends of connector will be handled by the internal structure of the association block [1].  This approach give us not only the ability to decompose ports and connectors but also the a
3 comments
Read more